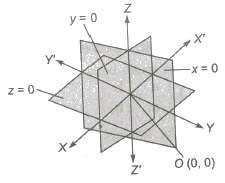 3. Vector equation of a line passing through a point with position vector a and parallel to vector b is r = a + λ b, where A, is a parameter.

4. Vector equation of a line passing through two given points having position vectors a and b is r = a + λ (b – a) , where λ is a parameter.

5. (a) The length of the perpendicular from a point

where, 1, m, n are direction cosines of the line.

6. Skew Lines Two straight lines in space are said to be skew lines, if they are neither parallel
nor intersecting.

7. Shortest Distance If l1 and l2 are two skew lines, then a line perpendicular to each of lines 4 and 12 is known as the line of shortest distance.

8. The shortest distance between the lines

A plane is a surface such that, if two points are taken on it, a straight line joining them lies wholly in the surface.

General Equation of the Plane

Equation of the Plane Passing Through a Fixed Point

Normal Form of the Equation of Plane 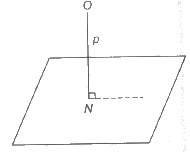 The intercept form of equation of plane represented in the form of x / a + y / b + z / c = 1
where, a, b and c are intercepts on X, Y and Z-axes, respectively.
For x intercept Put y = 0, z = 0 in the equation of the plane and obtain the value of x. Similarly, we can determine for other intercepts.

Equation of Planes with Given Conditions

(i) Equation of a plane passing through the point A(x1, y1, z1) and parallel to two given lines with direction ratios 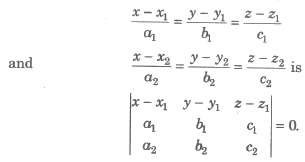 Parallelism and Perpendicularity of Two Planes

Angle between a Line and a Plane

Distance of a Point from a Plane

Bisectors of Angles between Two Planes

One of these planes will bisect the acute angle and the other obtuse angle between the given plane.

A sphere is the locus of a point which moves in a space in such a way that its distance from a fixed point always remains constant.

General Equation of the Sphere

Tangency of a Plane to a Sphere

Plane Section of a Sphere