Let f(x) be a function. Then, the collection of all its primitives is called the indefinite integral of f(x) and is denoted by ∫f(x)dx. Integration as inverse operation of differentiation. If d/dx {φ(x)) = f(x), ∫f(x)dx = φ(x) + C, where C is called the constant of integration or arbitrary

Symbols f(x) → Integrand
f(x)dx → Element of integration
∫→ Sign of integral
φ(x) → Anti-derivative or primitive or integral of function f(x)
The process of finding functions whose derivative is given, is called anti-differentiation or integration.

If d/dx {φ(x)} = f (x), then ∫f(x)dx = φ(x) + C. For different values of C, we get different functions, differing only by a constant. The graphs of these functions give us an infinite family of curves such that at the points on these curves with the same x-coordinate, the tangents are parallel as they have the same slope φ'(x) = f(x). 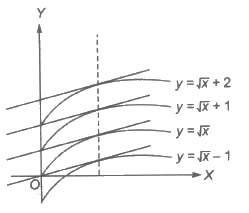 Above figure shows some members of the family of curves given by y = + C for different C ∈ R.

Comparison between Differentiation and Integration

(i) Both differentiation and integration are linear operator on functions as 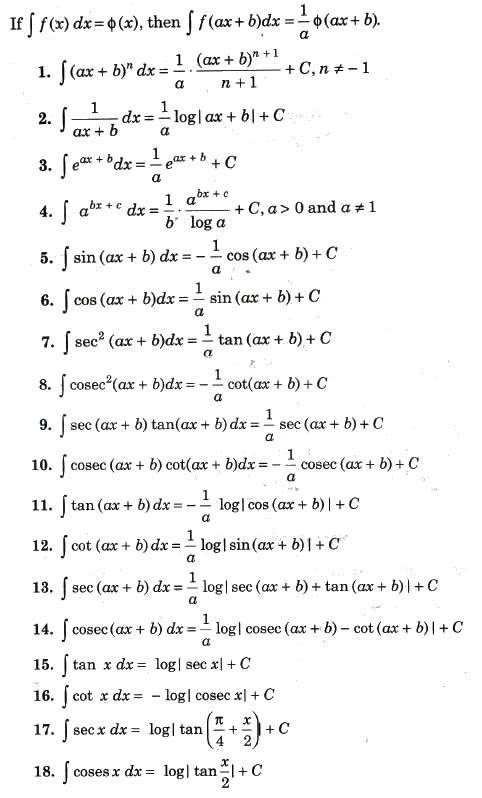 Trigonometric Identities Used for Conversion of Integrals into the Integrable Forms 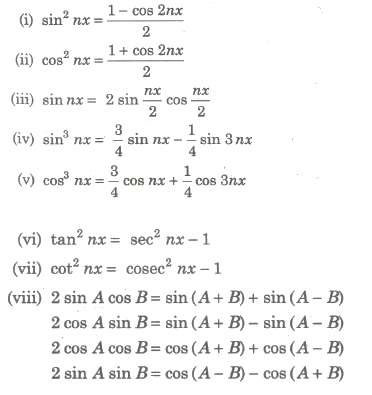 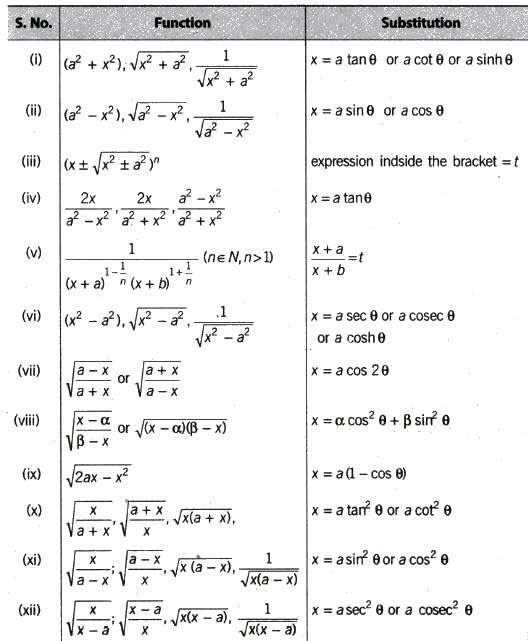 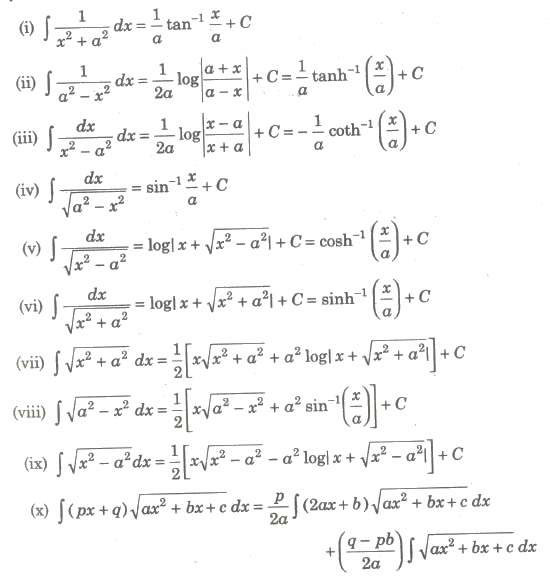 Important Forms to be converted into Special Integrals

To evaluate the above type of integrals, we proceed as follow (a) Divide numerator and denominator by cos2x. (b) Rreplace sec2x, if any in denominator by 1 + tan2 x. (c) Put tan x = t, then sec2xdx = dt 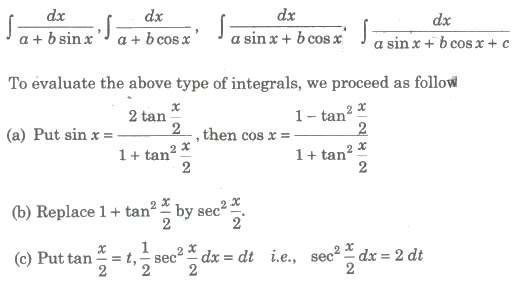 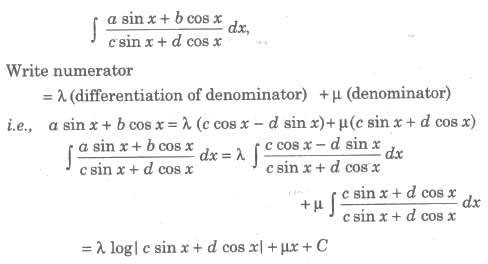 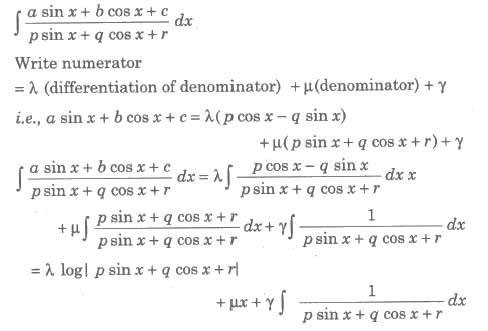 To evaluate the above type of integrals, we proceed as follows

This method is used to integrate the product of two functions. If f(x) and g(x) be two integrable functions, then

Integral of the Form 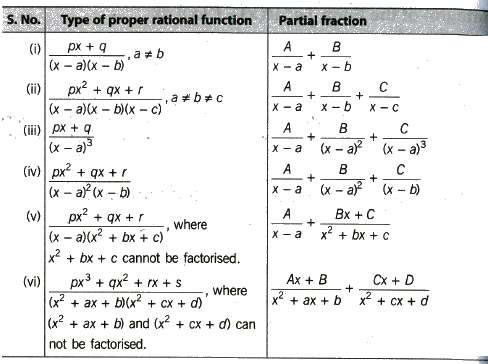 Shortcut for Finding Values of A, B and C etc.

Case I. When g(x) is expressible as the product of non-repeated line factors. 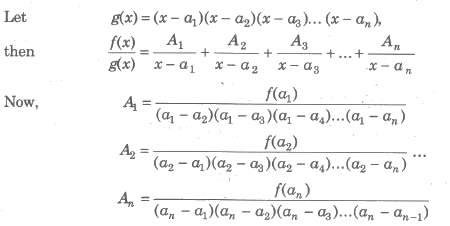 Trick To find Ap put x = a in numerator and denominator after P deleting the factor (x — ap).

Case II. When g(x) is expressible as product of repeated linear factors.

Here, all the constant cannot be calculated by using the method in Case I. However, Bl, B2, B3, … , Bn can be found using the same method i.e., shortcut can be applied only in the case of non-repeated linear factor.

Irrational function of the form of (ax + b)1/n and x can be evaluated by substitution (ax + b) = tn, thus 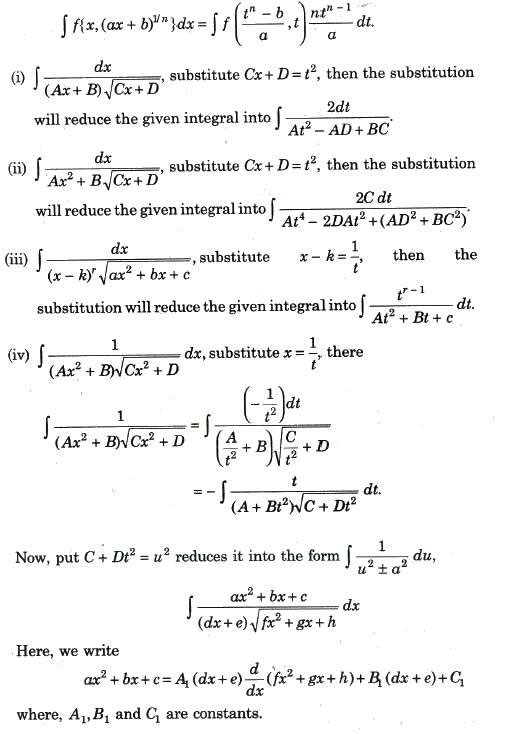 Integrals of the Type (bxm + bxn)P

Case I. If P ∈ N (natural number) we expand the binomial theorem and integrate. 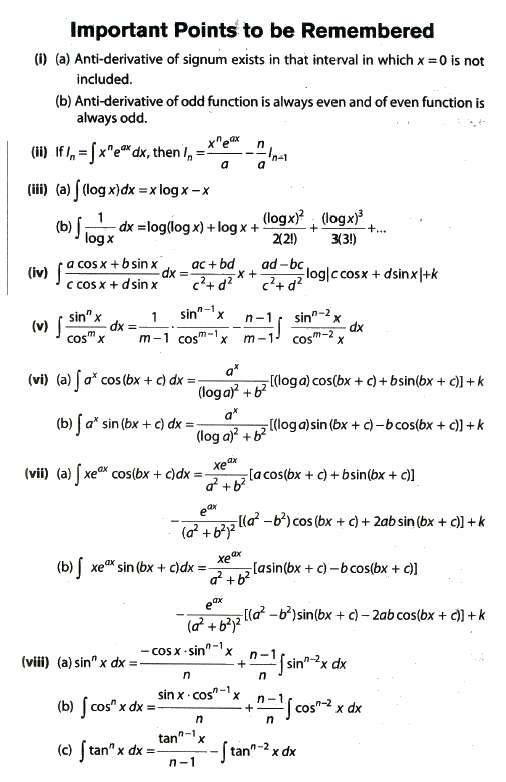