Areas of Parallelograms and Triangles Notes For Class 9 Formulas

Areas of Parallelograms and Triangles

You may recall that the part of the plane enclosed by a simple figure is called a planar region corresponding to that figure. The magnitude or measure of this lanar region is called its area.

We are also familiar with the concept of congruent figures.

Two figures are called congruent, if they have the same shape and the same size.

FIGURES ON THE SAME BASE AND BETWEEN THE SAME PARALLELS

Two figures are said to be on the same ‘base add between the same parallels, if they have a common base (side) and the vertices (or the vertex) opposite to the common base of each figure lie on a line parallel to the base.

If a parallelogram PQRS, a rectangle EFGH and a triangle LMN are so drawn that their bases lie on a straight line (say, CD) and their other vertices lie on a line AB parallel to it (CD), then the parallelogram, the rectangle and the triangle are said to be between the same parallels. 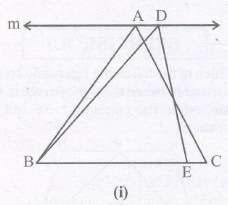 PARALLELOGRAMS ON THE SAME BASE AND BETWEEN THE SAME PARALLELS.

Statement : Parallelograms on the same base and between the same parallels are equal in area.

Remark: Area of a parallelogram is the product of its any side and the corresponding altitude.

TRIANGLES ON THE SAME BASE AND BETWEEN THE SAME PARALLELS

Two triangles on the same base (or equal bases) and between the same parallels are equal in area. 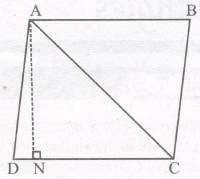 In other words, area of a triangle is half the product of its base (or any side) and the corresponding altitude (or height).

Remarks : Two triangles with same base (or equal bases) and equal areas will have equal corresponding altitudes.

Theorem : Two triangles having the same base (or equal bases) and equal areas lie between the same parallels.