In this pdf file you can see answers of following Questions

Question 12.1 What is meant by the following terms ? Give an example of the reaction in each case.
(i) Cyanohydrin
(ii) Acetal
(iii) Semicarbazone
(iv) Aldol
(v) Hemiacetal
(vi) Oxime
(vii) Ketal (
vii) Imine
(ix) 2,4-DNP-derivative
(x) Schiff’s base

Question 12.5 Draw structures of the following derivatives.
(i) The 2,4-dinitrophenylhydrazone of benzaldehyde
(ii) Cyclopropanone oxime
(iii) Acetaldehydedimethylacetal
(iv) The semicarbazone of cyclobutanone
(v) The ethylene ketal of hexan-3-one
(vi) The methyl hemiacetal of formaldehyde

Question 12.7 Which of the following compounds would undergo aldol condensation, which the Cannizzaro reaction and which neither? Write the structures of the expected products of aldol condensation and Cannizzaro reaction.
(i) Methanal
(ii) 2-Methylpentanal
(iii) Benzaldehyde
(iv) Benzophenone
(v) Cyclohexanone
(vi) 1-Phenylpropanone
(vii) Phenylacetaldehyde
(viii) Butan-1-ol
(ix) 2,2-Dimethylbutanal

Question 12.8 How will you convert ethanal into the following compounds?
(i) Butane-1,3-diol
(ii) But-2-enal
(iii) But-2-enoic acid

Question 12.9 Write structural formulas and names of four possible aldol condensation products from propanal and butanal. In each case, indicate which aldehyde acts as nucleophile and which as electrophile.

Question 12.11 An organic compound
(A) (molecular formula C8H16O2) was hydrolysed with dilute sulphuric acid to give a carboxylic acid (B) and an alcohol (C). Oxidation of (C) with chromic acid produced (B). (C) on dehydration gives but-1-ene. Write equations for the reactions involved. 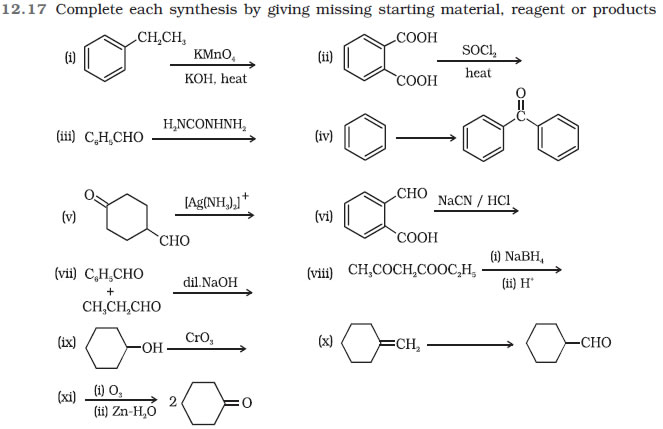 Question 12.18 Give plausible explanation for each of the following:
(i) Cyclohexanone forms cyanohydrin in good yield but 2,2,6-trimethylcyclohexanone does not.
(ii) There are two –NH2 groups in semicarbazide. However, only one is involved in the formation of semicarbazones.
(iii) During the preparation of esters from a carboxylic acid and an alcohol in the presence of an acid catalyst, the water or the ester should be removed as soon as it is formed.

Question 12.19 An organic compound contains 69.77% carbon, 11.63% hydrogen and rest oxygen. The molecular mass of the compound is 86. It does not reduce Tollens’ reagent but forms an addition compound with sodium hydrogensulphite and give positive iodoform test. On vigorous oxidation it gives ethanoic and propanoic acid. Write the possible structure of the compound.

Question 12.20 Although phenoxide ion has more number of resonating structures than carboxylate ion, carboxylic acid is a stronger acid than phenol. Why?