The subject of Science plays an important role in developing well-defined abilities in cognitive, affective and psychomotor domains in children. It augments the spirit of enquiry, creativity, objectivity and aesthetic sensibility. Syllabus of upper primary stage demands that a number of opportunities should be provided to the students to engage them with the processes of Science like observing, recording observations, drawing, tabulation, plotting graphs, etc., whereas the secondary stage also expects abstraction and quantitative reasoning to occupy a more central place in the teaching and learning of Science. Thus, the idea of atoms and molecules being the building blocks of matter makes its appearance, as does Newton’s law of gravitation. 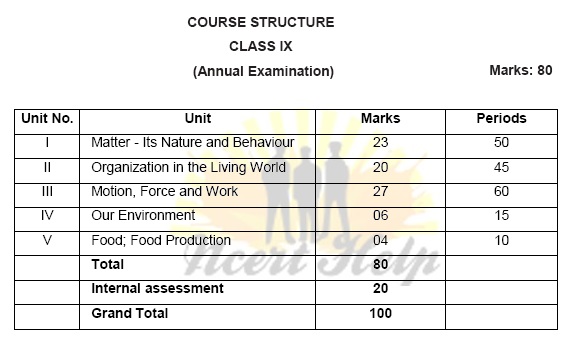 Unit I: Matter-Nature and Behaviour

Particle nature and their basic Units: Atoms and molecules, Law of constant proportions, Atomic and molecular masses. Mole concept: Relationship of mole to mass of the particles and numbers.

Theme: The World of the Living (45 Periods)

Tissues, Organs, Organ System, Organism: Structure and functions of animal and plant tissues (only four types of tissues in animals; Meristematic and Permanent tissues in plants).

Health and Diseases: Health and its failure. Infectious and Non-infectious diseases, their causes and manifestation. Diseases caused by microbes (Virus, Bacteria and Protozoans) and their prevention; Principles of treatment and prevention. Pulse Polio programmes.

Distance and displacement, velocity; uniform and non-uniform motion along a straight line; acceleration, distance-time and velocity-time graphs for uniform motion and uniformly accelerated motion, derivation of equations of motion by graphical method; elementary idea of uniform circular motion. Force and Newton’s laws : Force and Motion, Newton’s Laws of Motion, Action and Reaction forces, Inertia of a body, Inertia and mass, Momentum, Force and Acceleration. Elementary idea of conservation of Momentum. Gravitation: Gravitation; Universal Law of Gravitation, Force of Gravitation of the earth (gravity), Acceleration due to Gravity; Mass and Weight; Free fall. Floatation: Thrust and Pressure. Archimedes’ Principle; Buoyancy; Elementary idea of Relative Density. Work, energy and power: Work done by a Force, Energy, power; Kinetic and Potential energy; Law of conservation of energy. Sound: Nature of sound and its propagation in various media, speed of sound, range of hearing in humans; ultrasound; reflection of sound; echo and SONAR. Structure of the Human Ear (Auditory aspect only).

Plant and animal breeding and selection for quality improvement and management; Use of fertilizers and manures; Protection from pests and diseases; Organic farming. PRACTICALS (30 Periods) Practicals should be conducted alongside the concepts tough in theory classes. (LIST OF EXPERIMENTS) 1. Preparation of: Unit-I a) a true solution of common salt, sugar and alum b) a suspension of soil, chalk powder and fine sand in water c) a colloidal solution of starch in water and egg albumin/milk in water and distinguish between these on the basis of
transparency
filtration criterion
stability 2.


2. Preparation of Unit-I
a) A mixture
b) A compound using iron filings and sulphur powder and distinguishing between these on the basis of:
(i) appearance, i.e., homogeneity and heterogeneity
(ii) behaviour towards a magnet
(iii) behaviour towards carbon disulphide as a solvent
(iv) effect of heat
3. Separation of the components of a mixture of sand, common salt and ammonium chloride (or camphor). Unit-I
4. Perform the following reactions and classify them as physical or chemical changes: Unit-I
a) Iron with copper sulphate solution in water
b) Burning of magnesium ribbon in air
c) Zinc with dilute sulphuric acid
d) Heating of copper sulphate crystals
e) Sodium sulphate with barium chloride in the form of their solutions in water
5. Preparation of stained temporary mounts of (a) onion peel, (b) human cheek cells & to record observations and draw their labeled diagrams. Unit-II
6. Identification of Parenchyma, collenchyma and Sclerenchyma tissues in plants, striped, smooth and cardiac muscle fibers and nerve cells in animals, from prepared slides. Draw their labeled diagrams. Unit-II
7. Determination of the melting point of ice and the boiling point of water. Unit-I
8. Verification of the Laws of reflection of sound. Unit-III
9. Determination of the density of solid (denser than water) by using a spring balance and a measuring cylinder. Unit-III
10. Establishing the relation between the loss in weight of a solid when fully immersed in
a) Tap water Unit-III
b) Strongly salty water with the weight of water displaced by it by taking at least two different solids.
11. Determination of the speed of a pulse propagated through a stretched string/slinky (helical spring). Unit-III
12. Study of the characteristics of Spirogyra, Agaricus, Moss, Fern, Pinus (either with male or female cone) and an Angiospermic plant. Draw and give two identifying features of the groups they belong to. Unit-II
13. Observe the given pictures/charts/models of earthworm, cockroach, bony fish and bird. For each organism, draw their picture and record: Unit-II
a) one specific feature of its phylum.
b) one adaptive feature with reference to its habitat.
14. Verification of the law of conservation of mass in a chemical reaction. Unit-III
15. Study of the external features of root, stem, leaf and flower of monocot and dicot plants.