The curriculum of class 9 mathematics at Secondary stage primarily aims at enhancing the capacity of students to employ Mathematics in solving day-to-day life problems and studying the subject as a separate discipline. It is expected that students should acquire the ability to solve problems using algebraic methods and apply the knowledge of simple trigonometry to solve problems of height and distances. Syllabus of class 9 carrying out experiments with numbers and forms of geometry, framing hypothesis and verifying these with further observations form inherent part of Mathematics learning at this stage. The proposed curriculum includes the study of number system, algebra, geometry, trigonometry, mensuration, statistics, graphs and coordinate geometry, etc. 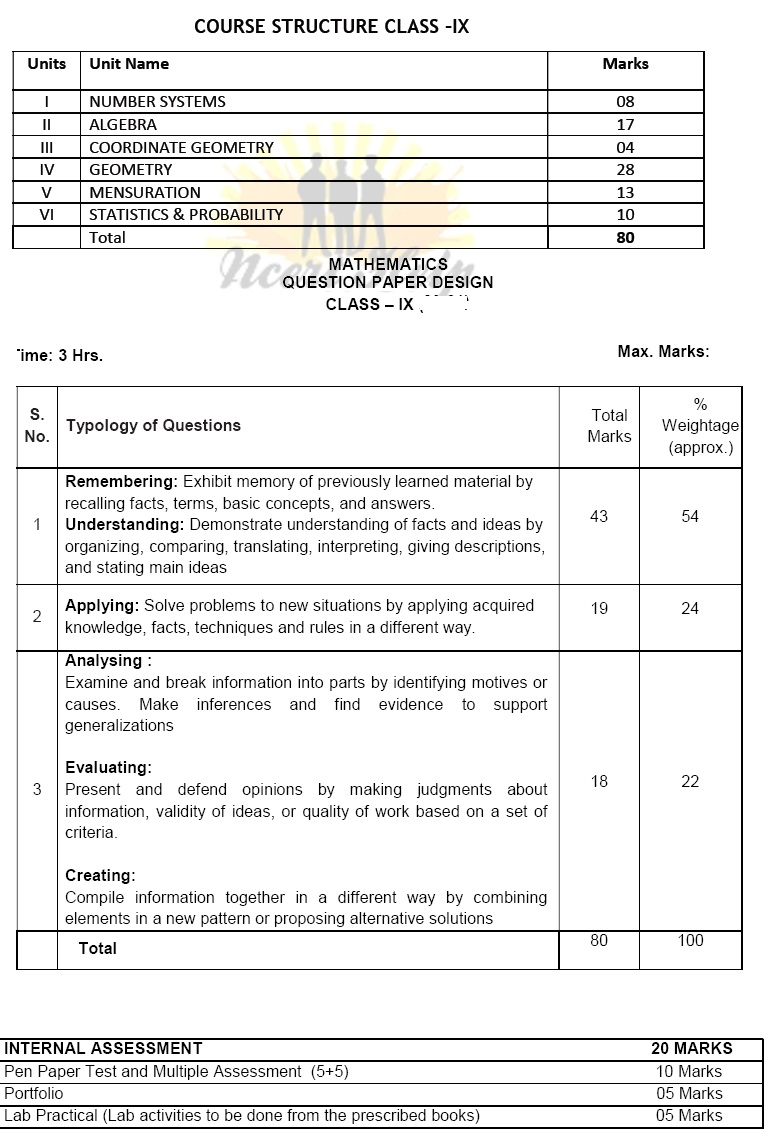 The Cartesian plane, coordinates of a point, names and terms associated with the coordinate plane, notations, plotting points in the plane.

1. INTRODUCTION TO EUCLIDS GEOMETRY (Not for assessment) (6) Periods

History - Geometry in India and Euclids geometry. Euclids method of formalizing observed phenomenon into rigorous Mathematics with definitions, common/obvious notions, axioms/postulates and theorems. The five postulates of Euclid. Equivalent versions of the fifth postulate. Showing the relationship between axiom and theorem, for example: (Axiom) 1. Given two distinct points, there exists one and only one line through them.(Theorem) 2. (Prove) Two distinct lines cannot have more than one point in common.

1. (Motivate) If a ray stands on a line, then the sum of the two adjacent angles so formed is 180O and the converse.
2. (Prove) If two lines intersect, vertically opposite angles are equal.
3. (Motivate) Results on corresponding angles, alternate angles, interior angles when a transversal intersects two parallel lines.
4. (Motivate) Lines which are parallel to a given line are parallel.
5. (Prove) The sum of the angles of a triangle is 180O.
6. (Motivate) If a side of a triangle is produced, the exterior angle so formed is equal to the sum of the two interior opposite angles.

Through examples, arrive at definition of circle and related concepts-radius, circumference, diameter, chord, arc, secant, sector, segment, subtended angle.
1. (Prove) Equal chords of a circle subtend equal angles at the center and (motivate) its converse.
2. (Motivate) The perpendicular from the center of a circle to a chord bisects the chord and conversely, the line drawn through the center of a circle to bisect a chord is perpendicular to the chord.
3. (Motivate) There is one and only one circle passing through three given non-collinear points.
4. (Motivate) Equal chords of a circle (or of congruent circles) are equidistant from the center (or their respective centers) and conversely.
5. (Prove) The angle subtended by an arc at the center is double the angle subtended by it at any point on the re maining part of the circle.
6. (Motivate) Angles in the same segment of a circle are equal.
7. (Motivate) If a line segment joining two points subtends equal angle at two other points lying on the same side of the line containing the segment, the four points lie on a circle.
8. (Motivate) The sum of either of the pair of the opposite angles of a cyclic quadrilateral is 180° and its converse

Area of a triangle using Herons formula (without proof) and its application in finding the area of a quadrilateral.

History, Repeated experiments and observed frequency approach to probability.
Focus is on empirical probability. (A large amount of time to be devoted to groupand to individual activities to motivate the concept; the experiments to be drawn from real - life situations, and from examples used in the chapter on statistics).