The Syllabus of class 10 in the subject of Mathematics has undergone changes from time to time in accordance with growth of the subject and emerging needs of the society. The present revised syllabus has been designed in accordance with National Curriculum Framework 2005 and as per guidelines given in the Focus Group on Teaching of Mathematics which is to meet the emerging needs of all categories of students. For motivating the teacher to relate the topics to real life problems and other subject areas, greater emphasis has been laid on applications of various concepts. The broad objectives of teaching of Mathematics at secondary stage are to help the learners to consolidate the Mathematical knowledge and skills acquired at the upper primary stage acquire knowledge and understanding. 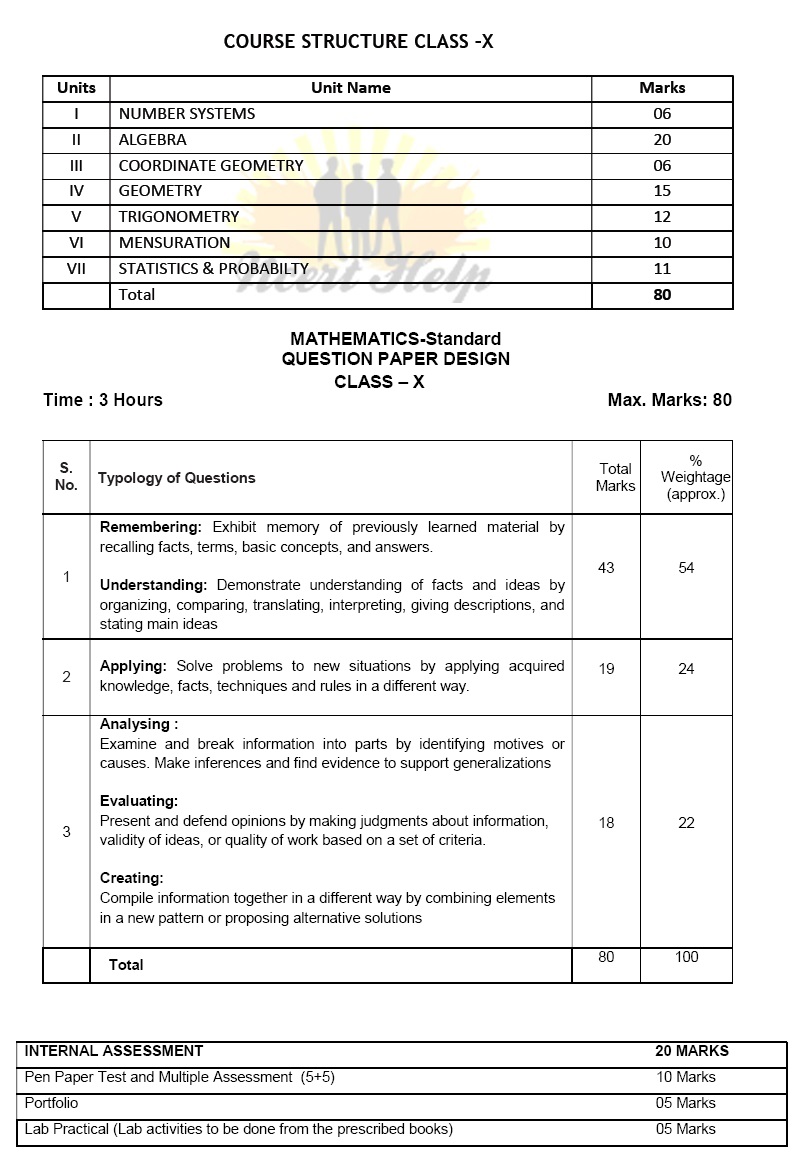 Zeros of a polynomial. Relationship between zeros and coefficients of quadratic polynomials. Statement and simple problems on division algorithm for polynomials with real coefficients.

Motivation for studying Arithmetic Progression Derivation of the nth term and sum of the first n terms of A.P. and their application in solving daily life problems.

1. Division of a line segment in a given ratio (internally).
2. Tangents to a circle from a point outside it.
3. Construction of a triangle similar to a given triangle.

Proof and applications of the identity sin2A + cos2A = 1. Only simple identities to be given.Trigonometric ratios of complementary angles.

3. HEIGHTS AND DISTANCES: Angle of elevation, Angle of Depression. (8) Periods

Simple problems on heights and distances. Problems should not involve more than two right triangles. Angles of elevation / depression should be only 30°, 45°, 60°.

Motivate the area of a circle; area of sectors and segments of a circle. Problems based on areas and perimeter / circumference of the above said plane figures. (In calculating area of segment of a circle, problems should be restricted to central angle of 60°, 90° and 120° only. Plane figures involving triangles, simple quadrilaterals and circle should be taken.)

1. Surface areas and volumes of combinations of any two of the following: cubes, cuboids, spheres, hemispheres and right circular cylinders/cones. Frustum of a cone.
2. Problems involving converting one type of metallic solid into another and other mixed problems. (Problems with combination of not more than two different solids be taken).

Classical definition of probability. Simple problems on finding the probability of an event.