What is a mixture? Name the types of mixtures? What is the difference between them?
Answer: A mixture is a combination of two or more substances (elements or compounds) which is not done chemically.
Mixtures are two types Homogeneous Mixtures and Heterogeneous mixtures.
Homogeneous Mixtures: A Homogeneous mixture has a uniform composition of its components throughout its mass. It does not have visible boundaries of separation between the various components. For example a sugar solution or a salt solution.
Heterogeneous Mixtures: A Heterogeneous mixtures does not have a uniform composition throughout its mass also it has visible boundaries of separation between various components. For example mixture of sand and water.

What is a solution? Write its properties.
Answer: A solution is a homogeneous mixture of two or more substances. A solution has a solvent and a solute as its components.The component of the solution that dissolves the other component in it (usually the component present in larger amount) is called the solvent.The component of the solution that is dissolved in the solvent (usually present in lesser quantity) is called the solute.
Properties of a solution
• A solution is a homogeneous mixture.
• The particles of a solution are smaller than 1 nm (10-9 metre) in diameter. So, they cannot be seen by naked eyes.
• Because of very small particle size, they do not scatter a beam of light passing through the solution. So, the path of light is not visible in a solution.
• The solute particles cannot be separated from the mixture by the process of filtration. The solute particles do not settle down when left undisturbed,
that is, a solution is stable.

What is a colloid? Write its properties.
Answer: Colloid: A colloid is a heterogeneous mixture whose particles are not as small as solution but they are so small that cannot be seen by naked eye. When a beam of light is passed through a colloid then the path of the light becomes visible. For example milk, smoke etc.
Properties of a colloid
• A colloid is a heterogeneous mixture.
• The size of particles of a colloid is too small to be inidually seen by naked eyes.
• Colloids are big enough to scatter a beam of light passing through it and make its path visible.
• They do not settle down when left undisturbed, that is, a colloid is quite stable.
• They cannot be separated from the mixture by the process of filtration. But, a special technique of separation known as centrifugation can be used to separate the colloidal particles.

What is a Tyndall effect?
Answer: This scattering of a beam of light by the particles of a colloid is called the Tyndall effect. When we apply torch light on a galss of milk then the path of the light becomes visible but it is not so in case of water because in milk light is scattered by its very fine particles. See the following diagram:

Tyndall effect can be observed when sunlight passes through the canopy of a dense forest. In the forest, mist contains tiny droplets of water, which act as particles of colloid dispersed in air. If is shown in the diagram below: 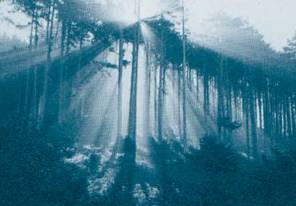 What are the various methods for separating the components of a mixture?
Answer: 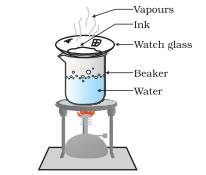 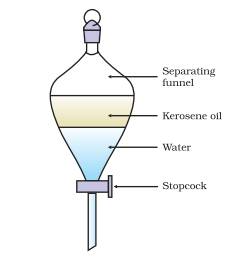 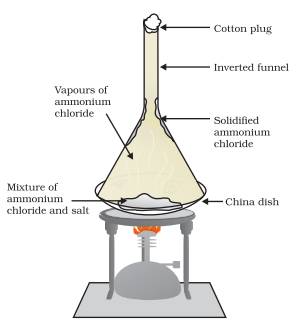 Explain Centrifugation.
Answer: Sometimes the solid particles in a liquid are very small and pass through a filter paper. For such particles the filtration technique cannot be used for separation. Such mixtures are separated by centrifugation. The principle is that the denser particles are forced to the bottom and the lighter particles stay at the top when spun rapidly.

Explain Chromatography.
Answer: Chromatography is the technique used for separation of those solutes that dissolve in the same solvent.
To understand how this technique can be used let us perform an activity.
Take a thin strip of filter paper. Draw a line on it using a pencil, approximately 3 cm above the lower edge as shown in figure(a). Put a small drop of ink (water soluble, that is, from a sketch pen or fountain pen) at the centre of the line. Let it dry. Lower the filter paper into a jar/glass/ beaker/test tube containing water so that the drop of ink on the paper is just above the water level, as shown in Fig(b) and leave it undisturbed.
Watch carefully, as the water rises up on the filter paper. Now observe that the coloured component that is more soluble in water, rises faster and in this way colours get separated.

Applications of Chromatography
To separate
• colours in a dye
• pigments from natural colours
• drugs from blood.

Explain the method of simple distillation.
Answer: This method is used to separate the mixture of two miscible liquids where difference between their boiling points is at least 25 ºC.
Acetone and water are miscible liquids also the difference between their boiling point is more than 25 ºC so they can be separated by the method of simple distillation. Follow the steps given below

(i) Take a mixture in the distillation flask fit it with the thermometer.
(ii) Arrange the apparatus as shown in the given figure.
(iii) Heat the mixture slowly keeping a close watch on thermometer.
(iv) Since the acetone has lower boiling point starts vaporises and condenses in the condenser which is finally collected in the beaker. Explain the method of fractional distillation.
Answer: This method is used to separate the mixture of two miscible liquids where difference between their boiling points is less than 25 ºC. Also to separate a mixture of two or more miscible liquids for which the difference in boiling points is less than 25 K, fractional distillation process is used, for example, for the separation of different gases from air, different factions from petroleum products etc. The apparatus is similar to that for simple distillation, except that a fractionating column is fitted in between the distillation flask and the condenser. A simple fractionating column is a tube packed with glass beads. The beads provide surface for the vapours to cool and condense repeatedly, as shown in following figure. 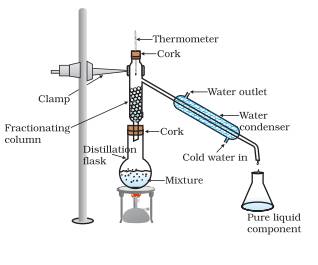 How can we obtain different gases from air?
Answer: Air is a homogeneous mixture and can be separated into its components by fractional distillation. The flow diagram given under shows the steps of the process. 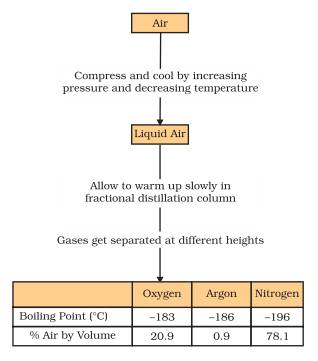 If we want oxygen gas from air, we have to separate out all the other gases present in the air. The air is compressed by increasing the pressure and is then cooled by decreasing the temperature to get liquid air. This liquid air is allowed to warm-up slowly in a fractional distillation column, where gases get separated at different heights depending upon their boiling points.

What is a chemical change? Give example.
Answer: A change in which a substance reacts with another substance to undergo a change in chemical composition. For example burning of a candle in which wax burns and converted into carbon dioxide and water.

Differentiate between mixtures and compounds.
Answer:

2. List the points of differences between homogeneous and heterogeneous mixtures.
Answer:

1. Differentiate between homogeneous and heterogeneous mixtures with examples.
Answer:

2. How are sol, solution and suspension different from each other?
Answer:

1. How will you separate a mixture containing kerosene and petrol (difference in their boiling points is more than 25ºC), which are miscible with each other?
Answer: kerosene and petrol are miscible liquids also the difference between their boiling point is more than 25 ºC so they can be separated by the method of distillation. Follow the steps given below

(i) Take a mixture in the distillation flask fit it with the thermometer.
(ii) Arrange the apparatus as shown in the given figure.
(iii) Heat the mixture slowly keeping a close watch on thermometer.
(iv) Since the petrol has lower boiling point starts vaporises and condenses in the condenser which is finally collected in the beaker. 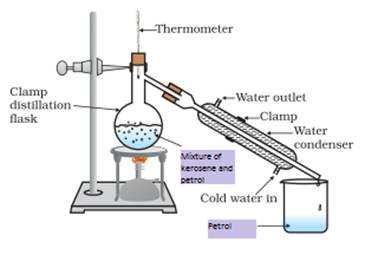 2. Name the technique to separate
(i) butter from curd,
(ii) salt from sea-water,
(iii) camphor from salt.
Answer:

1. Classify the following as chemical or physical changes:
(i)cutting of trees,
(ii) melting of butter in a pan,
(iii)rusting of almirah,
(iv)boiling of water to form steam
(v) passing of electric current, through water and the water breaking down into hydrogen and oxygen gases,
(vi) dissolving common salt in water,
(vii) making a fruit salad with raw fruits, and
(viii) burning of paper and wood.

Sublimation.
(c) Small pieces of metal in the engine oil of a car

Filtration
(d) Different pigments from an extract of flower

Question 2. Write the steps you would use for making tea. Use the words solution, solvent, solute, dissolve, soluble, insoluble, filtrate and residue.
Answer:

(i) Tea can be prepared by following steps:Take 100ml of water as solvent and boil it few minutes.
(ii) Now add one tea spoon sugar, one tea spoon tea leaves and 50ml of milk. Here sugar, tea leaves and milk are solute.
(iii) Now boil it again for few minutes so that sugar will dissolves in solution as sugar is soluble in water
(iv) Now filter the solution. Collect the filtrate in cup. The insoluble tea leaves will be left behind as residue.

Question 3. Pragya tested the solubility of three different substances at different temperatures and collected the data as given below (results are given in the following table, as grams of substance dissolved in 100 grams of water to form a saturated solution).

(a) Saturated solution: Solution in which no more solute can be dissolved at a particular temperature is known as saturated solution. For example in aqueous solution of sugar no more sugar can be dissolved at room temperature.
(b) Pure Substance: Any substance is said to be pure if and only if it is made up of single type of particles means all the particles of that substance should be of same chemical nature. For example water, sugar, salt etc.
(c) Colloid: A colloid is a heterogeneous mixture whose particles are not as small as solution but they are so small that cannot be seen by naked eye. When a beam of light is passed through a colloid then the path of the light becomes visible. For example milk, smoke etc.
(d) Suspension: A suspension is a heterogeneous mixture in which solids are dispersed in liquids. The solute particles in suspension do not dissolve but remain suspended throughout the medium. For example Paints, Muddy water chalk water mixtures etc.

Question 8. Identify the solutions among the following mixtures.
(a) Soil
(b) Sea water
(c) Air
(d) Coal
(e) Soda water.
Answer: Out of the above mixtures Sea water, Air and Soda water are solution.

Question 11. Which of the following are chemical changes?
(a) Growth of a plant
(b) Rusting of iron
(c) Mixing of iron filings and sand
(d) Cooking of food
(e) Digestion of food
(f) Freezing of water
(g) Burning of a candle.
Answer: Examples of chemical changes are
Growth of plant, Rusting of Iron, Cooking of food, Digestion of food, and burning of candle.