Matter: Any substance which occupies space and has mass is known as matter. Early Indian philosophers classified matter in five basic elements: air, earth, water, fire and sky that also known as Panch Tatva.
States of matter: Matter exist in three different states that are Solid, Liquid and Gas.
Matter is made up of very small particles: All matter is made up of very small particles that are not visible to naked eye. We can prove this by performing the following experiment: Take two or three crystals of potassium permanganate and add in 100ml of water. We will see that the colour of the water gets changed. Now take 10ml of this solution and add it into another 100ml of fresh water, again you will observe that the colour of water will change but it is not that much dark as in first case. Now repeat this procedure three more time still you will find that the colour of the water gets change but it will become fainter and fainter.

This experiment shows that just a few crystals of potassium permanganate can colour a large volume of water (about 1000 L). So we conclude that there must be millions of tiny particles in just one crystal of potassium permanganate, which keep on iding themselves into smaller and smaller
particles. Ultimately a stage is reached when the particles cannot ide further into smaller particles.

(i) Solids have definite shape and distinct boundaries.
(ii) Solids have fixed volume.
(iii) They have negligible compressibility.
(iv) They are rigid (their shape cannot be changed).
(v) Their intermolecular force of attraction is maximum.
(vi) The kinetic energy of its particles is minimum.

(i) Liquids do not have definite shape and distinct boundaries.
(ii) Liquids have fixed volume.
(iii) They can be compressed.
(iv) They take up the shape of the container (they can change its shape).
(v) They are fluid and thus can flow like water.
(vi) Their intermolecular force of attraction is less than solids.
(vii)The kinetic energy of its particles is more than solids.

(i) Gases neither have definite shape nor have fixed volume.
(ii) They can be compressed much.
(iii) They can take any shape.
(iv) They are neither rigid nor fluids.
(v) Their intermolecular force of attraction is least.
(vi) The kinetic energy of its particles is maximum.

Observe the following diagram to memorise this Interconversion states of matter: 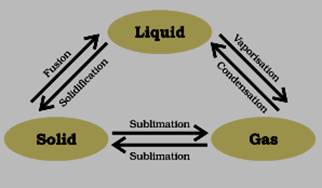 What is Dry Ice?
We know that gases can be liquefied by applying pressure and reducing temperature. When carbon dioxide is stored under very high pressure it becomes solid and known as solid CO2. Solid CO2 gets converted directly to gaseous state on decrease of pressure to 1 atmosphere without coming into liquid state. This is the reason that solid carbon dioxide is also known as dry ice.

Question 2. (a) Tabulate the differences in the characteristics of states of matter.
(b) Comment upon the following:
rigidity, compressibility, fluidity, filling a gas container, shape, kinetic energy and density.
Answer: (a)

Question 3. Give reasons
(a) A gas fills completely the vessel in which it is kept.
(b) A gas exerts pressure on the walls of the container.
(c) A wooden table should be called a solid.
(d) We can easily move our hand in air but to do the same through a solid block of wood we need a karate expert.
Answer:

Question 5. What type of clothes should we wear in summer?
Answer: During summer we should wear cotton cloths because they are good absorber of water. As Cotton cloths absorbs sweat rapidly resulting in higher rate of evaporation Due to which our body feels cool.

Question 3. Give reason for the following observations.
(a) Naphthalene balls disappear with time without leaving any solid.
(b) We can get the smell of perfume sitting several metres away.
Answer: (a) Naphthalene balls undergo sublimation due to which it converts directly into vapours and disappear into air without leaving any solid.
(b) The particles of perfume diffuse rapidly into the air and its smell can be felt while sitting several metres away.

Question 9. Name A, B, C, D, E and F in the following diagram showing change in its state