what is the importance of chemistry?
(1) Chemistry plays an important role in meeting human needs for food, health care products and other materials
(2) Production of a variety of fertilizers, improved varieties of pesticides and insecticides
(3) Preparation of drugs isolated from plant and animal sources or prepared by synthetic methods.
(4) Design and synthesize new materials having specific magnetic, electric and optical properties.
(5) Production of superconducting ceramics, conducting polymers, optical fibres and large scale miniaturization of solid state devices.

What is matter ?
Anything which has mass and occupies space is called matter. for example, book, pen, pencil, water, air, all living beings etc. are composed of matter.
matter can exist in three physical states viz. solid, liquid and gas. 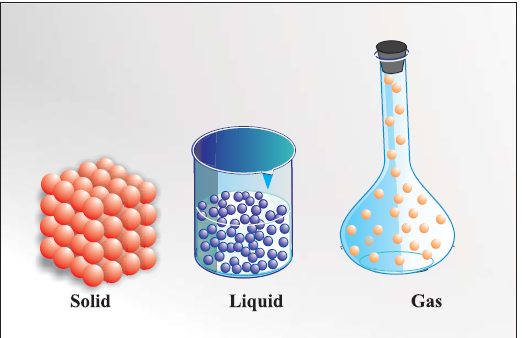 Classification of matter:
Matter can be classified as mixtures or pure substances.
Mixture : A mixture contains two or more substances present in it (in any ratio) which are called its components.
For example, sugar solution in water, air, tea etc.
Mixtures are two types
heterogeneous mixtures : the components completely mix with each other and its composition is uniform throughout.
Examples Sugar solution, air
heterogeneous mixtures: the composition is not uniform throughout and sometimes the different components can be observed.
Example: mixtures of salt and sugar
What are the method of separation of component of mixture?
components of a mixture can be separated using physical methods such as simple hand picking, filtration, crystallisation, distillation etc

Pure substances. They have fixed composition . constituents components of pure substances cannot be separated by simple physical methods.
Examples Copper, silver, gold, water, glucose etc
Pure substances can be further classified into elements and compounds
Elements: An element consists of only one type of particles. These particles may be atoms or molecules.
Examples: Sodium, copper, silver, hydrogen, oxygen etc.
Compound: When two or more atoms of different elements combine, the molecule of a compound is obtained. the atoms of different elements are present in a compound in a fixed and definite ratio and this ratio is characteristic of a particular compound. the properties of a compound are different from those of its constituent elements. Constituent particles can be separated by chemical methods.
The examples of some compounds are water, ammonia, carbon dioxide, sugar etc
What are the physical properties of the matter?
Physical properties are those properties which can be measured or observed without changing the identity or the composition of the substance.
Examples: colour, odour, melting point,boiling point, density etc
What are the chemical properties?
Chemical properties are those properties which require a chemical changes to occur
Examples: acidity or basicity, combustibility etc.

1 mol : The mole is the amount of substance of a system which contains as many elementary
entities as there are atoms in 0.012 kilogram of carbon-12; its symbol is “mol”. 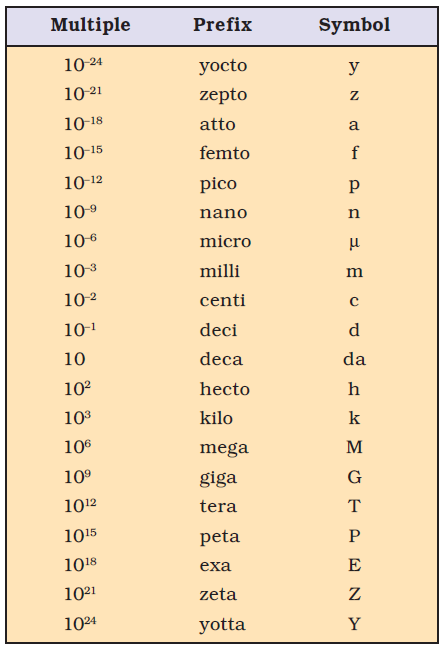 Addition and Subtraction of Significant Figures
The result cannot have more digits to the right of the decimal point than either of the original numbers.

Law of Conservation of Mass
It states that matter can neither be created nor destroyed.
Law of Definite Proportions
It stated that a given compound always contains exactly the same proportion of elements by weight.
Example : Oxygen and hydrogen in water always bear ratio of 16:2 or 8:1 by mass
Law of Multiple Proportions
According to this law, if two elements can combine to form more than one compound, the masses of one element that combine with a fixed mass of the other element, are in the ratio of small whole numbers.
Example
Hydrogen + Oxygen → Water
2g 16g 18g
Hydrogen + Oxygen → Hydrogen Peroxide
2g 32g 34g
Here, the masses of oxygen (i.e. 16 g and 32 g) which combine with a fixed mass of hydrogen (2g) bear a simple ratio, i.e. 16:32 or 1: 2.
Gay Lussac’s Law of Gaseous Volumes
when gases combine or are produced in a chemical reaction they do so in a simple ratio by volume
provided all gases are at same temperature and pressure.
Example
Hydrogen + Oxygen → Water
100 mL 50 mL 100 mL
Thus, the volumes of hydrogen and oxygen which combine together (i.e. 100 mL and 50 mL) bear a simple ratio of 2:1
Avogadro Law
Avogadro proposed that equal volumes of gases at the same temperature and pressure should contain
equal number of molecules
Example .
Hydrogen + Oxygen → Water
we see that two volumes of hydrogen combine with one volume of oxygen to give two volumes of water without leaving any unreacted oxygen.

DALTON’S ATOMIC THEORY
1. Matter consists of inisible atoms.
2. All the atoms of a given element have identical properties including identical mass. Atoms of different elements differ in mass.
3. Compounds are formed when atoms of different elements combine in a fixed ratio.
4. Chemical reactions involve reorganization of atoms. These are neither created nor destroyed in a chemical reaction.
5.Dalton’s theory could explain the laws of chemical combination.
amu: One atomic mass unit is defined as a mass exactly equal to one twelfth the mass of one carbon - 12 atom.
1 amu = 1.66056×10–24 g
Average Atomic Mass
Many naturally occurring elements exist as more than one isotope. When we take into account the existence of these isotopes and their relative abundance (per cent occurrence),
Example < style="margin-left:25px">Carbon has three isotopes

An empirical formula represents the simplest whole number ratio of various atoms present in a compound whereas the molecular formula shows the exact number of different types of atoms present in a molecule of a
compound.
Example
Molecular formula of glucose is C6H12O6 and there empirical formula will CH2O
STOICHIOMETRY AND STOICHIOMETRIC CALCULATIONS
Stoichiometry, deals with the calculation of masses (sometimes volumes also) of the reactants and the products involved in a chemical reaction. Before understanding how to calculate the amounts of reactants required or those produced in a chemical reaction,
Example
Let us consider the combustion of methane.
A balanced equation for this reaction is as given below :
CH4 (g) + 2O2 (g) → CO2 (g) + 2 H2O (g)
Thus, according to the above chemical reaction, we get
< class="fontx" style="margin-left:25px"> · Phase of reactant and product
· The coefficients 2 for O2 and H2O are called stoichiometric coefficients.
· One mole of CH4(g) reacts with two moles of O2(g) to give one mole of CO2(g) and two moles of H2O(g)
· One molecule of CH4(g) reacts with 2 molecules of O2(g) to give one molecule of CO2(g) and 2 molecules of H2O(g)
· 22.4 L of CH4(g) reacts with 44.8 L of O2 (g) to give 22.4 L of CO2 (g) and 44.8 L of H2O(g)
· 16 g of CH4 (g) reacts with 2×32 g of O2 (g) to give 44 g of CO2 (g) and 2×18 g of H2O (g).
Limiting Reagent
The reactant which is present in the lesser amount gets consumed after sometime and after that no further
reaction takes place whatever be the amount of the other reactant present is called limiting reagent. Or the reactant which gets consumed, limits the amount of product formed and is called the limiting reagent.
Mass per cent or weight per cent (w/w %) :
Mass % of an element = molar mass of that element x 100 / molar mass of compound
Mass % of a component = mass of component x 100 / total mass of the solution
Mole Fraction
It is the ratio of number of moles of a particular component to the total number of moles of the solution.
Mathematically
Mole fraction of component A = number of moles of component A / total number of moles
Molarity
Molarity is denoted by M. It is defined as the number of moles of the solute present in 1 litre of the solution.
Mathematically
Molarity (M) = No. of moles of solute / volume of solution in liter
Molality
Molality is denoted by m. It is defined as the number of moles of solute present in 1 kg of solvent.
Mathematically
Molality (m) = No. of mole of solute /Mass of solvent in Kg

Reaction of combustion of methane is

Hence, Answer will 1 mol of CO2 will produced

The molecular mass of water, H2O

The molecular mass of methane, CH4

Convert in simple ratio we get

Hence, the empirical formula of the iron oxide is Fe2O3.

According to Stoichiometry of the reaction

According to Stoichiometry of the reaction

Molar represent molarity of the solution

Hence given molarity of solution will 0.375M

Molarity (M) = No. of moles of solute / volume of solution in liter

Plug the values in above formula we get

Plug above values in formula we get

Given that Mass percent of nitric acid in the sample = 69 %

Plug the values in above formula

Plug the value in equation (2) we get

Plug the value in equation (1), we get

Convert in simple ratio we get

The empirical formula of the iron oxide is Fe2O3.

Plug the values in equation (1), we get

Hence, the molecular formula of the oxide is Fe2O3.

Plug the values we get