Metals: Those elements which have good tendency to lose electrons (or electropositive in nature) are called metals. In their physical properties they are lustre, malleable, ductile and good conductors of heat and electricity.

Non-Metals: Non-Metals are those elements which have tendency to gain electrons to form anions. Thus non-metals are called electronegative in nature. They are generally soft and bad conductors of electricity.

Semi-Metals or Metalloids: Semi-metals or metalloids are those elements which behave like both metals and non-metals.
Following table shows the position of Metals, Non-metals and the metalloids in the modern periodic table.

Malleability: It is the property of metals by which metals can be converted into thin sheets by using a hammer.

Ductility: It is the property of metals by which metals can be drawn into thin wires.

Minerals: The naturally occurring compounds of elements are known as minerals.

Ores: The mineral from which element can be extracted easily and profitably is called an ore.

Gangue: The impurities present in the ore such as sand, rocks etc are known as gangue.

Calcination: It is the process of heating concentrated ore in the absence of air below its meting point.

Metallurgy: It is the process in which pure metals are extracted from their ores.

Concentration of ores: It is the process in which the unwanted impurities (gangue) are removed from the ores.

Alloy: Alloy is the homogeneous mixture of two or more metals or metal and non-metal.

Amalgam: Those alloys in which one of the metals is mercury.

Aqua regia: Aqua regia is Latin word which means ‘Royal Water’. It is the mixture of concentrated Hydrochloric acid and concentrated nitric acid in the ratio of 3:1. It is capable of dissolving metals like Gold and Platinum.


Galvanisation: It is a method by which iron and steel can be prevented from rusting. In this method a thin layer of Zinc is made on the article which prevents them from rusting. 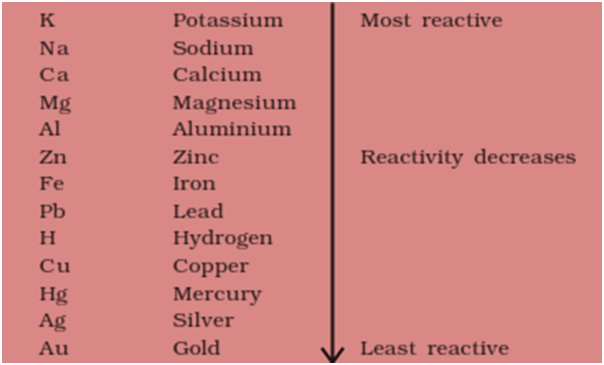 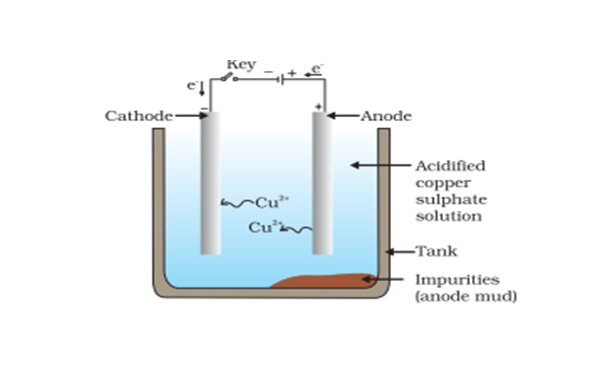 There are separate steps for these groups for obtaining pure metals. As shown in following diagram. 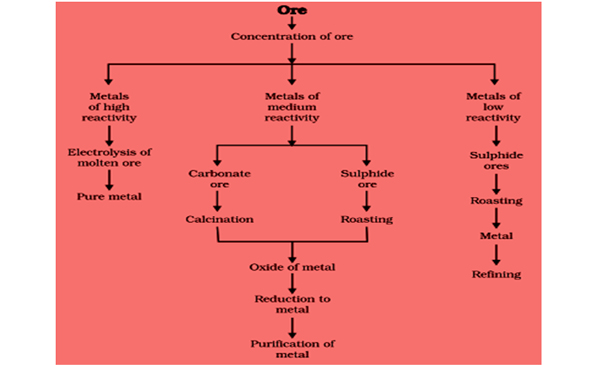 Reaction of metals with oxygen: Generally all metals combine with oxygen to form metal oxide if we supply some heat.

Reaction of metals with water: Most of the metals react with water to form metal hydroxide and release hydrogen gas. For example just see the following chemical equation.

Reaction of metals with Acids: When metals react with acids they generally displace hydrogen from dilute acids.

Difference between Metals and Non-metals on the basis of their physical properties:

Some common, simple and Polyatomic Ions: Must learn to make chemical formula of a compound. 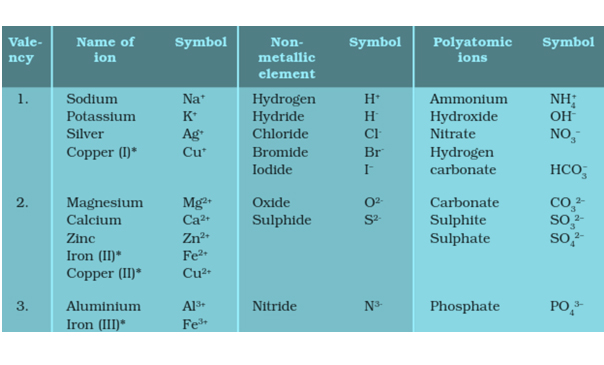 Question 1. Give an example of a metal which
(i) is a liquid at room temperature.
(ii) can be easily cut with a knife.
(iii) is the best conductor of heat.
(iv) is a poor conductor of heat.
Answer:
(i) Mercury(Hg)
(ii) Sodium(Na)
(iii) Silver(Ag)
(iv) Lead(Pb)

Question 2. Explain the meanings of malleable and ductile.
Answer:
Malleable: A substance which can be beaten to convert into sheets are said to be malleable. Generally all metals are malleable. For example copper, iron etc.
Ductile: A substance which can be drawn into wires are said to be ductile. Generally all metals are ductile. For example silver, gold etc.

Question 2. Write equations for the reactions of
(i) iron with steam
(ii) calcium and potassium with water
Answer:

Question 3. Samples of four metals A, B, C and D were taken and added to the following solution one by one. The results obtained have been tabulated as follows.

(ii) What would you observe if B is added to a solution of Copper (II) sulphate?
Answer: B will displace copper from copper sulphate.

Question 1.(i) Write the electron-dot structures for sodium, oxygen and magnesium.
(ii) Show the formation of Na2O and MgO by the transfer of electrons.
(iii) What are the ions present in these compounds?
Answer: (i) 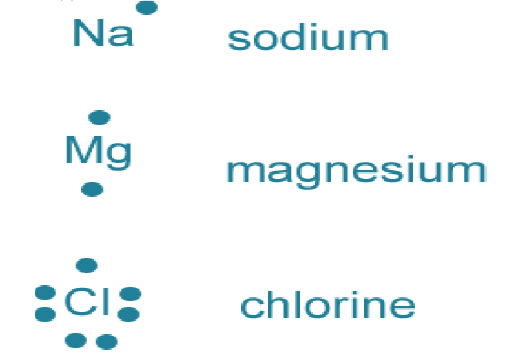 Question 1. Define the following terms.
(i) Mineral (ii) Ore (iii) Gangue
Answer:
Mineral: The naturally occurring compounds of elements are known as Mineral.
Ore: The mineral from which element can be extracted easily and profitably is called an ore.
Gangue: The impurities present in the ore such as sand, rocks etc are non as gangue.

Question 2. Name two metals which are found in nature in the free state.
Answer: Gold and Platinum

Question 3. What chemical process is used for obtaining a metal from its oxide?
Answer: A metal can be extracted from its oxide by the process of reduction

Quesiton 1. Metallic oxides of zinc, magnesium and copper were heated with the following metals.

Question 3. What are alloys?
Answer: An alloy is the homogeneous mixture of two or more metals or metals and non metals. For example brass is an alloy of copper and zinc.

Question 5. You are given a hammer, a battery, a bulb, wires and a switch
(a) How could you use them to distinguish between samples of metals and Non-metals?
(b) Assess the usefulness of these tests in distinguishing between metals and non-metals.
Answer: (a) If the substance can be hammered to convert into sheets then it is metal if it is broken into pieces then it is non-metal. Set up the arrangement using bulb, battery, wire and switch as shown in figure. Place the substance between Point A and B if the bulb starts glowing then the substance is a Metal otherwise it is non-metal because metals are good conductor of electricity. 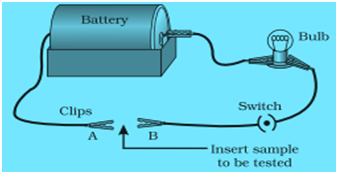 (b) Generally above methods can be used to identify metals and non-metals. But there are some exceptions also for example Sodium is metal which is not malleable in fact it is brittle. Graphite allotrope of non-metal carbon is a good conductor of electricity.

Question 9. Pratyush took sulphur powder on a spatula and heated it. He collected the gas evolved by inverting a test tube over it, as shown in figure below.
(a) What will be the action of gas on
(i) dry litmus paper?
(ii) moist litmus paper?
(b) Write a balanced chemical
equation for the reaction taking place. 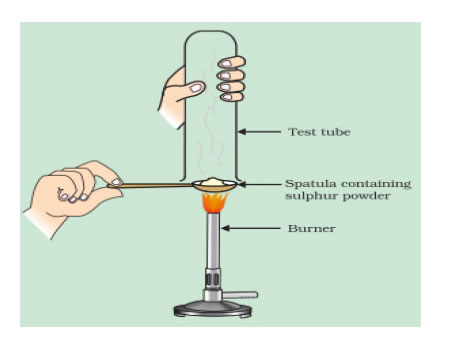 Quesiton 10. State two ways to prevent the rusting of iron.
Answer: (1) by Painting or galvanising, (2) By making alloys

Quesiton 12. Give reasons
(a) Platinum, gold and silver are used to make jewellery.
(b) Sodium, potassium and lithium are stored under oil.
(c) Aluminium is a highly reactive metal, yet it is used to make utensils for cooking.
(d) Carbonate and sulphide ores are usually converted into oxides during the process of extraction.
Answer:

(a) Platinum, gold and silver are used to make jewellery because these are low reactive metals so rarely corrosion occur (In silver) and hence do not lost their shine and lustre.

(b)The reaction of these substances with oxygen is highly exothermic which may cause fire, also they react with water to form base so they are kept in oil.

(c)This is because aluminium is good conductor of heat and electricity. To prevent its reaction with food at high temperature a protective layer of aluminium oxide (Al2O3 ) is formed which prevent further corrosion.

(d)Carbonate and sulphide ores are usually converted into oxides during the process of extraction because it is easier to obtain metal from its oxide as compared with its sulphides or carbonates ore.

Quesiton 13. You must have seen tarnished copper vessels being cleaned with lemon or tamarind juice. Explain why these sour substances are effective in cleaning the vessels.
Answer: In tarnished copper vessel there is layer formed due to corrosion which is basic in nature which is dissolved in the lemon or tamarind juice which are acidic in nature. Thus the vessel get thoroughly cleaned.

Question 15. A man went door to door posing as a goldsmith. He promised to bring back the glitter of old and dull gold ornaments. An unsuspecting lady gave a set of gold bangles to him which he dipped in a particular solution. The bangles sparkled like new but their weight was reduced drastically. The lady was upset but after a futile argument the man beat a hasty retreat. Can you play the detective to find out the nature of the solution he had used?
Answer: The solution he had used was Aqua regia. Aqua regia is Latin word which means ‘Royal Water’. It is the mixture of concentrated Hydrochloric acid and concentrated nitric acid in the ratio of 3:1. It is capable of dissolving metals like Gold and Platinum. Since the outer layer of the gold bangles is dissolved in aqua regia so their weight was reduced drastically.