The main aim of monetary policy is _____. (Choose the correct alternative)

(a) to bring price stability in the economy

(b) employment generation in the country

Two components of money supply are

i) Currency with public

(a) to bring price stability in the economy

State, whether the given statement is true or false:

‘Unexpected obsolescence is a component of depreciation.’

₹ 2,000 note lying in the wallet of Rohini, a student is an example of ____ (stock/flow) variable. (Fill up the blank with correct alternative)

Intermediate consumption refers to the value of goods and services used during the production process.

Loans offered by commercial banks _________ (increase/ decrease) the money supply in the economy. (fill up the blank with correct alternative)

The sum of factor payments is equal to ______. a) Domestic Income b) National Income c) Per Capita Real Income d) Per Capita Nominal Income

State whether the given statement is true or false:

‘Expenditure on Ujjwala Yojna launched by the Government is an example of capital Expenditure.’

Full employment refers to a situation where all those who are willing and able to work, at the prevailing wage rate get work.

If the value of Average Propensity to Consume (APC) is 0.8 and National Income is ₹ 4,000 crores, the value of savings will be ___. (Choose the correct alternative)

Give any one example of ‘debt creating capital receipts’ in the Government Budget.

‘Domestic services (Household Services) performed by a woman are not considered as an economic activity.’ Defend or refute the given statement with valid reason.

The given statement is defended. As the activities which are performed by a woman (homemaker) cannot be evaluated in monetary terms. Therefore these activities are not considered as an economic activity.

State the three components of Income from Property and Entrepreneurship.

Three components of Income from Property and Entrepreneurship are

Elaborate the objective of ‘allocation of resources’ in the Government Budget.

Allocation of resources: Government seeks to allocate resources with a view to balance the goals of all sections of the society. Production of goods and sevices which are injurious to health may be discouraged through taxation policy. Similarly, production of socially beneficial goods may be encouraged through subsidies. If private sector does not take initiative in certain activities (Public Goods) government may directly control them like water supply and sanitation etc.

Effective Demand refers to that level of employment where Aggregate Demand is equal to Aggregate Supply.

Thus, the inventories-in-hand of producers may fall. As a result, producers may plan to raise output and employment. This mechanism will continue to operate till the two forces become equal.

Explain the function of central bank as ‘Banker, Agent and Advisor’ of the government.

Bank rate is the rate of interest at which central bank lends money to commercial banks to meet their long term needs. An increase in bank rate may force commercial banks to increase their lending rate. It will make borrowings costlier to general public. This leads to discouraging people to borrow and will thus restrict money supply in the economy or viceversa.

(i) Trade deficit is always a great cause of worry for an economy.

(iii) ‘Indians investing in assets abroad’ will be recorded under debit side of capital account in Balance of Payments.

(a) Explain, what can be the likely impact of depreciation of the home currency on imports to the country.

(i) False, trade deficit is a lesser cause of worry if it reflects a rise in investment which will build the capital stock and increase the future output in an economy.

(iii) True, Indians investing in assets abroad will lead to an outflow of foreign currency, it will be recorded under debit side of capital account of balance of payment.

(a) On the basis of following information, identify whether the economy is in equilibrium or not :

(b) Answer the following questions on the basis of given figure : 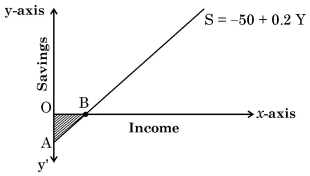 (i) What does the shaded area AOB indicate ?

(ii) What is the significance of point B ?

For Visually Impaired Candidates only :

(b) (i) Define saving function.

(ii) What is the significance of dis-savings ?

The economy is in equilibrium when AD = AS (Y)

(b): (i) The shaded area AOB represents the dis-savings.

(ii) Point B indicates break-even level of income where Consumption(C) is equal to Income (Y) or Savings (S) are zero.

For Visually Impaired candidates only

ii) Dis-savings occur when Consumption (C) is greater than Income (Y). This signifies that spending for basic needs which are necessary for survival is financed by past savings and borrowings.

Which of the following is not a benefit of organic farming?

b. Attractive returns on investment

World Trade Organisation (WTO) was established in 1995, as a successor organisation to _____. (Fill up the blank with correct answer)

India is not a member of which of the following regional/global economic grouping?

In the past few decades ______ (primary/ secondary/ tertiary) sector has created maximum job opportunities in India. (Fill up the blanks with correct alternative)

The main aim of ‘Great Leap Forward’ (GLF) in China was to ensure rapid increase of _____. (Choose correct alternative)

Disguised unemployment is a situation where in the number of workers engaged in a work is more than actually/optimally required.

State whether the following statement is true or false: ‘World Bank is known as International Bank for Registration and Delimitation (IBRD).’

The portion of agricultural produce which is sold in the market by the farmers is called marketed surplus.

Introduction of Economic Reforms in China took place in the year____. (Choose the correct alternative)

“Rapid increase in economic growth surely trickles down to the people under the absolutely poor category.”

Defend or refute the given statement with valid argument.

Do you agree with the given statement ? Support your answer with valid arguments.

This statement is refuted because-

(ii) The Green Revolution has increased the regional disparity and also the gap between the rich and the poor farmers.

(iii) The gains of economic growth have been grabbed by the rich.

Compare and analyse the given data of India and China, with valid reasons :

a. State the names of six Indian Systems of Medicines (ISM) under AYUSH scheme of Government of India.

b. Name any two non-conventional sources of energy.

(a) The six Indian Systems of Medicines (ISM) under AYUSH scheme of Government of India includes: Ayurveda, Yoga, Unani, Siddha, Naturopathy and Homeopathy.

(b) The two non-conventional sources of energy are: solar energy and wind energy.

Discuss briefly the rationale behind choosing ‘self-reliance’ as a planning objective for Indian economy.

The occupational structure of India on the eve of independence had the following two main features:

i) Predominance of agriculture sector: The agricultural sector accounted for the largest share of workforce with approximately three-fourth of the workforce depending on agriculture, directly or indirectly.

ii) Growing regional variation- Due to rise of manufacturing and services sector in some parts of India (like the then Madras, Bombay and Bengal Presidencies) the dependency ratio of workforce on agricultural sector declined.

i. To reduce foreign dependence: Planning objective of „self-reliance‟ targeted to promote economic growth and modernisation, the Indian five year plans in the early years of post independence era stressed on the use of domestic resources in order to reduce our dependence on foreign countries.

“India is often called the „Outsourcing Destination‟ of the world”. Discuss the prime reasons for this name given to India”.

The prime reasons for India being called as the outsourcing destination of the world are:

(i) Carrying capacity of environment.

(iv) Absorptive capacity of the environment.

(a) Carrying capacity of environment

Bio composting - It refers to the process of converting organic waste of various types into natural manure.

Sustainable development - It refers to the development process that meets the needs of present generation without compromising on the ability of the future generations to meet their respective needs.

(d) Absorptive capacity of the environment

(a) Define worker-population ratio. What does it signifies ?

(b) Analyse the trends in sectoral distribution of work force in India on the basis of data :

(a) “The Prime Minister urged to increase the rural income by increasing non-farm activities.”

Explain how non-farm activities can lead to rise in income of people in rural sector.

(b) “Indian health system needs the increased dose of public expenditure to cure itself.”

Defend or refute the given statement with valid arguments.

a. Non-farm activities (agro-processing industries, poultary, craft, handloom) provide alternative avenues for sustainable livelihood and may raise the level of income as the risks due to fluctuations in production and market prices is generally less. Agriculture in India is mainly a seasonal occupation, however, during off seasons, it becomes difficult to find employment and stabilize farmer’s income. Thus, the Prime Minister has urged appropriately in the best interest of the farmers of the rural India.